Gelles was one of six Scarsdale High School students who qualified for the competition, which was held virtually this year. Among those who competed,

Sophomore Carly Gelles won the National Championship in Oral Interpretation of Literature out of the 263 students that competed in the category.

In Oral Interpretation, students prepare two 10 minute selections, one prose and one poetry, that they perform in alternating rounds. Carly's prose selection was from the memoir "Educated" by Tara Westover. For her poetry selection, Carly wove together four poems on the related theme of the silencing caused by intimate partner violence.

Although the topic of intimate partner violence can be difficult, she worked closely with her coaches and parents throughout her poem selection and performance preparation, and had ongoing conversations about the subject throughout.

Gelles' championship caps a banner year for the Speech & Debate team, who successfully transitioned to an entirely virtual format for every tournament this year. The team's season finale will be the National Speech & Debate Assocation National Tournament June 13-19. Gelles is shown below performing, and learning she has been crowned the champion. 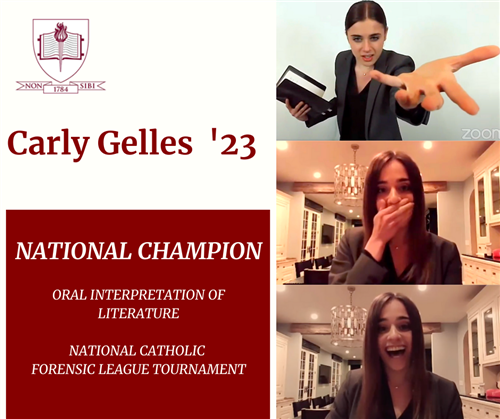